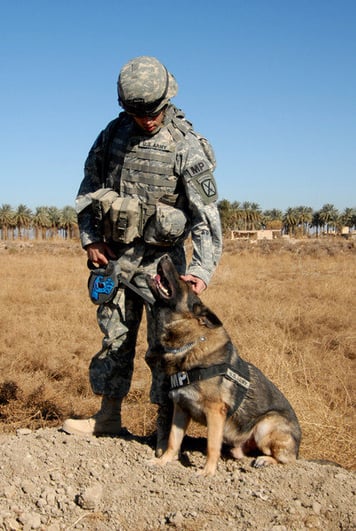 Not all heroes have two legs, and veteran military working dog, Sgt. Bodo, has proven this fact. When Joaquin Mello, a former Army canine handler, and now SOC Canine Handler, was assigned Bodo as his working dog while deployed, he didn’t know that his life would be protected by this amazing furry companion – a bond that never breaks.

While on a routine clearing mission near Najaf, Iraq in 2008, Spc. Mello and an Air Force K-9 Handler were asked to clear some suspicious piles of rubble around the convoy. To cover more ground quickly, Mello and Bodo cleared in front of the convoy while the Airman cleared behind. While searching, Mello had Bodo on a retractable leash and noticed that he started behaving in an unusual manner. Bodo stood behind Mello, and as he tried to coach Bodo ahead of him multiple times - Bodo wouldn’t budge. Mello then ordered Bodo to seek, but he suddenly jerked sharply behind him.

“Bodo jerking the leash, jerked my head up,” Mello said in a 2009 interview . “I heard a whiz and a loud ping like metal hitting rock. Sand started kicking up in my face and I’m waving my hands because I can’t see because I have dust in my eyes. Then it hit me like a ton of bricks – someone just shot at me.”

“He saved me by pulling me back from shots being fired at me, before I was even aware,” Mello said. “If I didn’t have him warning me, I might not be here today.”

Mello later declined recognition for a Combat Action Badge, stating, “I didn’t do anything spectacular. I just did my job. Bodo is the one who did something amazing.”

Mello worked with Bodo for two years and was extremely grateful for their time together. Despite his desire to adopt Bodo, military deployment schedules and living situations in military barracks often brings a challenge for military canine handlers, keeping military dogs from retiring with their handlers.

“It simply wasn’t an option when I was deployed in the Middle East,” Mello said. “We become one with our dogs and therefore want to stay together.”

This made it an easy decision for Mello in the next chapter of his life when his latest faithful SOC Canine Companion named ‘Hero’ was up for adoption after they lived and worked together for SOC several years overseas. Read more about Hero’s adoption story here.

When approached about adopting Hero, it wasn’t even a question, as he was my partner and such a great dog,” Mello said. “I am glad that SOC gave me the chance to adopt him.”

Although this was not a chance Mello was given with Bodo, he will never forget Bodo and is forever thankful for his lifesaving work.

SOC proudly honors all Veteran Canines, like Bodo, for their service and sacrifice to our nation on National K9 Veterans Day and every day. Read more about Learn more about SOC’s “Dog First” Philosophy here.

May 27, 2022 SOC Cyber Team Places in Top 40 in Global Hacking Challenge A small team led by SOC Cyber and comprised of industry partners and local college students participated in the annual Hack-A-Sat challenge hosted by …
April 06, 2022 How to Apply to a SOC Worldwide Protective Service (WPS) Position SOC is proud to be an organization with an established reputation as the employer of choice for security professionals around the world. Are you …